It stands to reason that the Haunting of Hill House story has had an influence on me from a young age. I found stories about hauntings, houses, and the supernatural to be endless sources of inspiration even in my teens. When I was in college and out on my own for the first time, movies like 1999’s The Haunting were popular. At least they were among the fans of horror and supernatural films. It was based on a novel written by Shirley Jackson in 1959. It featured an amazing house full of odd rooms, secret passages, and, of course, ghosts. My eccentric little self pined for that house and still does in a way.

It also boasted a well-known blockbuster director in Jan de Bont and a cast that included Liam Neisen and Catherine Zeta-Jones. If you haven’t seen it, I definitely say, watch it for nostalgia sake. It was pretty well done for the time.

Yet recently, it got a massive makeover and has been the talk of horror movie communities all over the internet. Netflix seems to have spared no expense in the creation of the new series The Haunting of Hill House. And I recently sat down to watch it.

I have to say, this is, in my humble opinion, one of the most well-done remakes in the genre. Once I sat down and watched the first episode, I was hooked. I ended up bingeing and watching the entire available series in one sitting. And I am hoping they continue the storyline for more.

Now, die-hard fans of the original films will point out some blatant deviations from the original storyline. However, I think that the writers did an amazing job of changing just enough of the story to enhance its creep factor, bring it to a modern audience, and still manage to make it feel original. (Which, incidentally, is a bit of a pet peeve of mine with the film industry in the USA, to begin with. More on that in another post.) They took, what some are calling a classic, and altered it enough to really tackle modern issues like drug addiction, mental illness, and child abuse. And I applaud the creators for not shying away from more supernatural and psychic elements as well. Honestly, I was pleasantly surprised to see how different the story of Hill House unfolded with the family who came to live there. It is a deep story that will, I’m sure, resonate with many people.

The visuals elements were immersive and full of subtle nuance. It is one of those series that you could watch several times and still see new things and draw a new conclusion each time you see it. I’m sure I’ll be watching it again myself in the near future. The darkness of the series isn’t found in the jump-scare tactics that most horror filmmakers rely on. Instead, it is in sadness, personal tragedy, pain, and loss where this series manages to pull at your nerves and set you on edge. Those tactics are well-placed and present for those classic horror film aficionados but, I honestly believe that even without those, this story has enough of a horror element to it that it fits the bill.

I admit to being skeptical about this at first. After all, why mess with something that was good, to begin with. But, I am glad to see that horror and suspense are taking a new direction. I hope that we see new voices, new stories, and a continuation of this style of filmmaking.

If you haven’t seen it, I highly recommend a Netflix weekend when you can watch the whole thing. Once you start, it will keep you riveted to the very end.

I want to post more reviews about books, movies, and tv series that line up with what I write. So you can see more of these posts in the months to come. Have a suggestion for a series, movie, or book? Why not drop it in the comments for me? Or just tell me what you thought of either the 1999 version of the Hill House story or this new adaptation! I’d love to hear what you thought as well.

It seems like it has been ages since I’ve published anything new. In fact, I doubt it even just seems that way and actually has been ages. Now, I know that whether I publish or not doesn’t define my status as a writer. I write, thus I am a writer by definition. However, my stories going out to the masses is a part of the process that is long overdue. And without further ado, let me just introduce my latest crazy contribution to the world of horror and supernatural fiction.

A Novella by Anne Belle

From the back cover:

Life was finally coming together for Anna. When Scott asked her to help him with a case involving a four year old child being attacked by unseen forces, she didn’t hesitate. What she didn’t expect was to come face to face with demons direct from her own past. Anna must make the decision to face the past and close doors she didn’t open before she can move on with her life. Will she find a way to be rid of him at last? Find out in the exclusive Kindle e-book release Exorcising The Past by Anne Belle

Exciting stuff right?! I’m really excited about this one. It will be a quick read for those who enjoy the genre. But, I’m happy to say that this could be the start of a series of short works that could be compiled into a collection later on. I am certainly open to the idea of the continuing characters and theme of the paranormal investigation cases if you, my dear readers, want more of Scott and Anna.

Just a quick preview this time. More details coming later in the week!

I am a sucker for a good ghost story.  How else did I get started writing the sort of fiction I do? 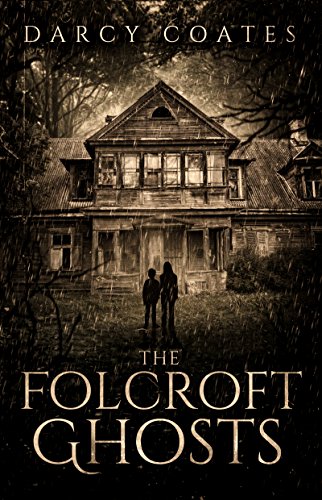 That being said, among my Amazon recommendations was this author I had never read before or heard of. So, with a $3.99 price tag on the kindle version, I decided to give it a shot.

I have to say that I was delighted with this gem of a read. From start to finish, the whole book was engaging for the imagination. In fact, I would place this squarely in the mystery genre since you spent most of the book piecing together clues with the main characters, a brother and sister duo in tragic circumstances.

Written from the perspective of the older sibling,  Darcy Coates’s style was captivating as it provided a window into how she coped with the incapacitation of a single parent as well as how she unravels what to do when faced with dangerous circumstances. As an older sibling myself I could easily relate to the girl and the sense of duty that Coates easily portrayed.

Well written and engaging, I was pleased with the read. I found myself reading this one in a matter of a couple of days between work and my other obligations. It helps that I had some slow time to read at the office. I would recommend this to readers both in the adult and the young adult audience spectrum. I thought it was a fairly clean read with a well-developed plot that had plenty of twists and turns before it was concluded.

Over all, I give this one 4 stars on Amazon and GoodReads.

Be sure to follow me on GoodReads, Amazon, Facebook, and Twitter for more reviews, releases, and news. Indie authors, keep watch for news on how you can have your book reviewed by me in upcoming Nightstand Reads Posts.